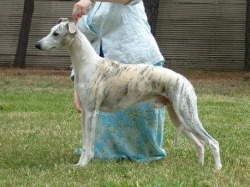 Troy has always been the happiest of campers from day one.  He opened his eyes upon the world, made the first of his trademark 'puma growls' and we fell for him hook, line, and sinker.  Blessed with Erroll Flynn-like charm, Troy always is the center of his own fan club, where ever he goes.  Troy was my mother's baby boy and was a wonderful companion to her.  He is now brightening my father's days, and is still an energetic, tail wagging, leaping, talking guy, at almost eleven years of age. 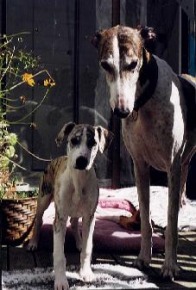 Baby Troy with Greyhound Pal Alex
As a puppy Troy more closely resembled a baby puma than a whippet, but he matured into a nice, proper whippet male.  He easily finished his show championship before he turned two, winning his second major at Lompoc, under English judge Zola Rawson, in a style that can only be described as 'unique'.

On the field Troy got a bit of a late start, but he was an enthusiatic, honest lure courser, earning a four point major, among a few other points. He consistently ran in the placements until he was a veteran.  Troy also has the distinction of being my most honest straight racer, always breaking first from the boxes, right down the center of the track and into the scrum at the end.  Unfortunately, he did not get to race until middle age, when his fastest years were behind him.

Everywhere he goes, Troy amasses a fan club of girl whippets, who seem to appreciate his good looks and good manners. Ironically, even though he has always had a harem of canine girlies hanging on his every move, all of the serious interest in Troy as a stud dog occurred after he was neutered. LOL.


Troy had a wonderful retirement life with my parents and the sight of him and my Dad out walking every day, first with Amie, and then just the two of them, always did my heart good.  Troy passed at the ripe age of fourteen, still of sound mind and strong heart.  His lifetime of wild leaps and collisions came back to haunt him and one of his discs blew out, rendering him paralyzed.  Since this was a dog who lived to walk, the decision was make to let him join his  ancestors at the Rainbow Bridge, where could be sound and whole again.