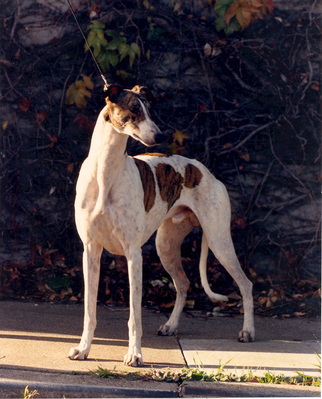 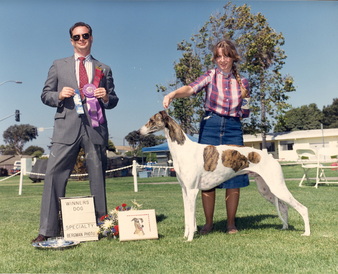 
Alex was a great re-introduction to the show ring for our family.  Purchased by my mother from a classified ad in the back of Sighthound Review as a promising eight-month old, Alex flew from New Mexico and arrived, after a long and twice delayed flight, to tip his head back and howl at his first sight of a California moon.

Alex had an amazing start in the ring, winning WD at the GCA Specialty the second time he was ever shown.  This was the day we met our friend Cindy Hatcher, who showed Alex to his big win. 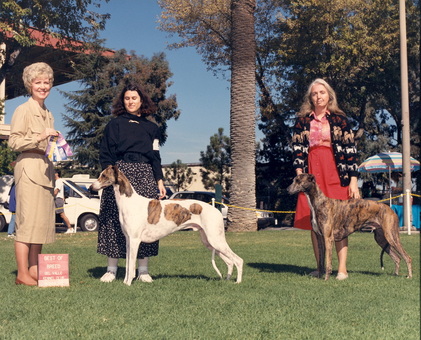 After his great start, Alex did take a while to finish.  He had a run of reserves, including two at specialties, to young puppies, and after getting two more majors and several breeds from the classes, he went to one year of shows needing one single point to complete his title.  He finally broke the curse, finishing with his fourth major, under Kent Delaney, at the old Sir Francis Drake show.  Alex is pictured winning the breed at Del Valle KC with my Mom handling, the same day his little brother Tiger finished.

Alex enjoyed lure coursing, and although he never finished his field titles, he was quite close to his ASFA FCh, only missing one of his placements.  He had a memorable day at the ASFA Region II Invitational one year, winning BOB.  Alex was also one of the first dogs who completed their JCs the very first day this title was available from the AKC.

Alex was a great dog, who stoically put up with generations of whippets.  He used to sit on the couch with my Dad and watch sports and drink iced tea and he never, ever stole food from people (except for one time).   He lived a long life for a big dog and I don't think we could have had a better greyhound friend. 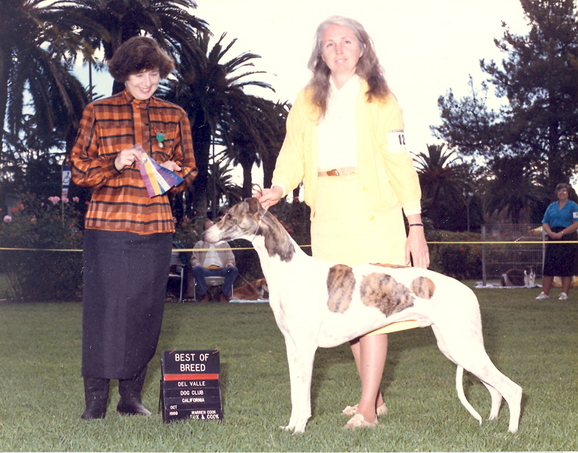