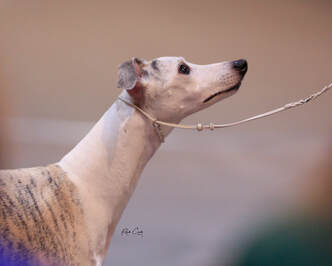 TJ at 13 years of age. Photo by Rhonda Cassidy. 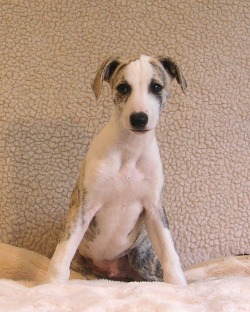 T.J. was our funniest whippet.  His sweet nature, coupled with his zest for life, and snuggle-bunny ways, made for a whippet who was always a blast to hang out with.  He was a keeper from the minute he was born, as he looked so much like my long lost, beloved Bentley. He was named T.J, for "Troy Junior", by my mom, who thought he resembled his uncle Troy (he didn't). These initials opened him up to a plethora of nicknames; Teej, TiJiBaba, Tee Gee Winston, Teejorama, and Tucumcari, just to name a few.  My sister called him "JoJo The Boy-Faced Dog" in tribute to his rather unique expression. Kellee christened him Ray, for the Ray of Sunshine that he was. T.J. happily answered to all his names!

Teej had a long and eventful life, missing his 16th birthday by one month.  He was never sick a day in his life, age just caught up with him. We will all miss The Teej! 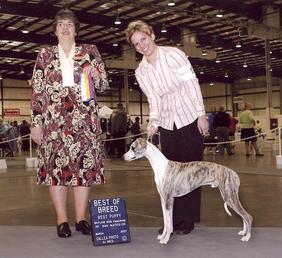 Baby TJ winning BOB
.TJ. got a good start in the show ring, winning multiple BOBs, a major, and an exciting Puppy Group One. Unfortunately, a midfield collision on the coursing field at the end of 2011 permanently tweaked his lower back, and due to this injury, he was retired from the show ring forever needing that final major. We gave it the old college try, but even though we came close, with more major reserves than we care to recall, it was not to be.  This is a real bummer, as he really deserved his title.  He is a handsome, moderately sized male, with a lot of his dam's glamour points.


Teej also enjoyed running pursuits in his youth, and had a real  knack for getting the high score in lure coursing on his first run and really messing things up the second time around, to end up just out of the points. Unfortunately, he was involved  in a mid-course collision in November of 2011 and this has affected his speed and soundness, and he will not lure course again.  He had a pretty steady career straight racing, and once he figured out not to make a right turn 10 yards before the finish line, he was a good honest runner, mostly running as a low "B".  T.J. had a great year at the CWA Conformation Competitions in 2011, winning or placing second in all four of the matches he competed in, to become the number 6 CWA Conformation Dog in the country. TJ limped along (literally) and managed to run enough to gain his TRP title in 2014, and he was then retired from all running sports.  His back says thank you even though his spirit is unhappy about this turn of events. 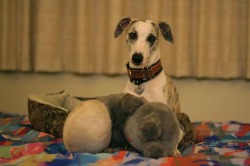 T.J. is pictured to the left with his best friend in the whole world, Bompy the Donkey.  While he can destuff any other toy in two seconds flat, Bompy is special and is carried around incessantly from place to place, often nursed on, and presented as a sign of high esteem to people T.J. really likes.  We are currently on Bompy XVIII (like Popes, Bompy's are designated with Roman Numerals), as he loves Bompy so much they do tend to fall apart after a while.
Did I mention T.J. is a character?

TJ had a scary adventure the summer of his eleventh year.  For some mysterious reason, he decided to escape from my house & run away when my Dad came to let him out one day when I was lure coursing.  Dad chased TJ through the streets of SF (even right up the middle of Market St!), and lost him about a mile away from my house.  Thanks to a quick thinking Good Samaritan, with an almond croissant, TJ was corralled about a 1/4 mile away from home.  We will never know what caused this steady senior to take off that day, but are very grateful that he was found and went to the nice lady with the snack!

Teej recently was awarded a new (and probably final) title, when he got his 150 points for his AKC BCAT on 11/17/18! He took a road trip to KS for the AWC National Specialty in April 2019 and won the 12 year & older dog class at the Veteran Sweepstakes under judge Mary Dukes.  TJ was then second in the regular really old dog class under Lisa Costello, earning a National plate. TJ was always a great traveler, who loved to see new places and stay in hotels.