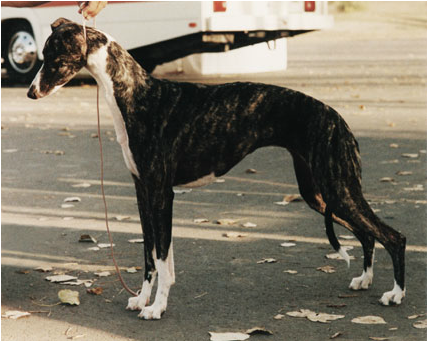 Locar's Creme De Cocao, JC
The Start Of It All!

A tiny brindle whirlwind, Julia blew into my life in 1989. Christened the "Scud Missle" by my dad, Julie immediately took over and ruled her household with an iron paw until the day she died at sixteen years of age. Willful, wild and wonderful, Julia's strong opinions and even stronger will were a source of entertainment and frustration for over sixteen years.

The Queen of Everything 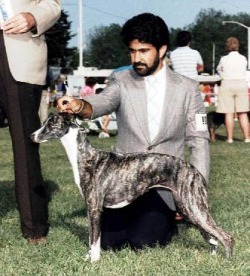 Julia had a bit of a hard row to hoe in the show ring in her youth, being a dark brindle in a sea of particolors. Julia and her handler Dan Silva persevered and managed to collect nine points, including a BOB and a big supported-entry major BOS.

To my eternal disappointment, the rather fast Julia was not destined to be a courser or racer, as she firmly believed in "taking out" any of the competition who got in her way! When fighting Julia's love of food became too trying, she was retired to motherhood and an ever-expanding waistline.

Julia had two litters. The first was by her cousin Ch. Broadstrider's By George, ROMX in 1993, and the second was by another paternal cousin, Ch. Starline's Reign On JC ROMX, in 1995. Both litters were linebreedings on the Morshor portion of her heritage.

From Julia's first litter came DCh. Milescross Double Indemnity, SC, CD, still regarded in many circles as one of the most beautiful whippet bitches ever, and our own late, beloved Ch. Milescross Shadow of a Doubt, JC. From her second litter, co-bred with Dan & Leslie Silva, came a grouping of lovely bitches. They included the multi-breed winning Ch. Milescross Elandan Rhapsody JC, the group placing Milescross Ballad of Elandan and Milescross Elandan Lyric, and Ch. Milescross Elandan Sonnet SC, an AWC National Specialty Best Brood Bitch. Julia was the dam of four bitches who produced litters (Demi, Spree, Gemma & Amie), but Demi and Amie stand as the cornerstones of our future breeding plans.

To this day the smartest whippet I've ever owned, Julia was a memorable friend and companion for almost seventeen years.