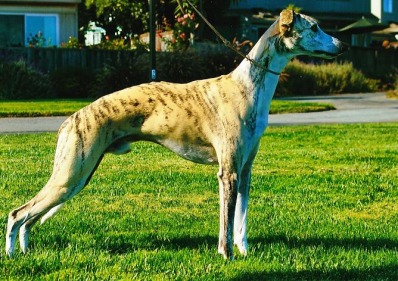 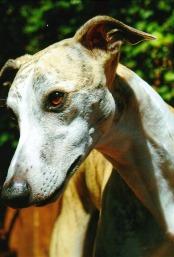 Derby was Pie and Stinger's littlest son.   he and Imari, being munchkins, were often lost among the bedding at Grand Prix.  In the crowd of 28 puppies, and being teeny, you had to have personality plus to make a mark, and sweet Derby did.  He was chosen at eight weeks by Debby & Rick Knutson, and they always did right by Derbs, whether is was going above and beyond giving his every opportunity in the ring or the field, or seeing that he had the best of care when he was diagnosed with heart disease as a senior. 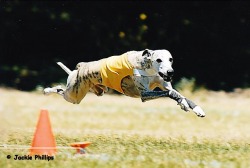 Derby got most of the way to his show title, just needing majors to finish.  He was not always easy to show, as he would only work for people he liked, and he was selective in who he let into his 'inner circle'.  When he liked you, he would do anything for you  -when he didn't -  he was  a major pill. :)

Derby really enjoyed lure coursing and always gave 110% in the field.  He won a four-point major and other points before his battle with the bulge got the better of him and he retired from competitive running pursuits.


Darby sadly passed away in his tenth year from congestive heart failure.  We will all miss this tough but sweet little guy!