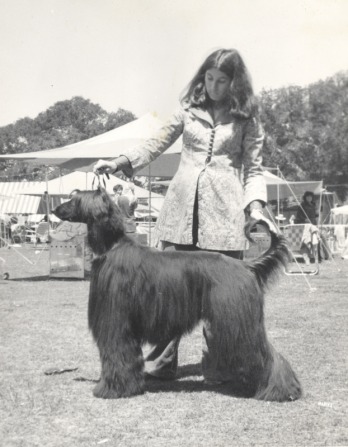 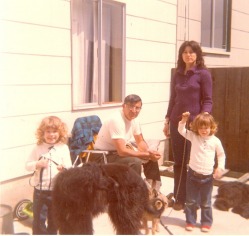 My mother was an animal lover right from the start.  Raised in an extended Italian American family in San Francisco, she was surrounded by pets and urban farm animals.  The family had a ranch in then rural Alamaden, and she got to ride horses, hang out with cows, and raise chickens (she had a memorable pet Banty hen named Eagle), all summer and every weekend.  Even while in the City, Christine found ways to be close to animals. Once she 'appropriated' a neighbor's elderly draft horse and took all of her little friends on a ride out to the beach!

Always artistic, she was drawing horses and dogs once she could hold a pencil. Christine drew and painted beautifully and pursued this skill throughout her life.  At the age of twenty she saw her first Afghan Hound and decided she had to have one of those exotic dogs.  As luck would have it, her neighbor Karen Titan bred afghans, and Mom got Fiamma (Italian for flame), a cute red brindle bitch, in 1968.

Christine quickly became involved in the dog show world and got her first show afghan, Omen, in 1970. At the same time she was raising and perfecting the coat on Omen, she had me and my twin sister Heather, got married, moved out into her first apartment - so, as you can see, it is possible to have children, a family life and dogs at the same time. 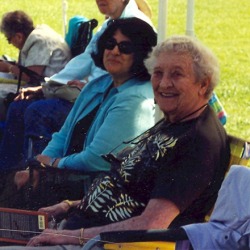 with Stacy Burke at the NCWFA Specialty
My mother showed dogs throughout the 1970's, on a very small scale, usually at matches only.  Christine believed in allowing well behaved children to come along to most events, even those which were usually considered better suited to adults. My sister and I were literally raised at dog events.  We learned early on to be good in public and got to go to antique shows, flea markets, and art shows, along with the dog shows, and always found these really fun places to be.  I am kind of amazed at how my sister and I would cry and cry as pre-schoolers if we were not allowed to go with Mom to places like the Hillsborough Antique Show - she just had the skill of making even dry things super fun and we wanted to be with her where the action was.

My mother was a really smart dog person and it really was a shame that she never was able to pursue dog breeding on any sort of significant level.  She always had a knack for picking out at a glance the best conformed animal at any type of livestock show and her off-the-cuff breeding advice was often brilliant.  I probably should have listened to her more when I had the chance.

One of my mother's most meaningful contributions to the dog world was her twenty years worth of Super 8 tapes of almost every whippet specialty show and big all-bred show she attended during this time frame.  She was behind the camera, taping each whippet, and these records are invaluable today for pedigree research, as well as for making it possible to  'see' everyone from the pillars of the breed, to obscure dogs who were only shown once, as they really were. 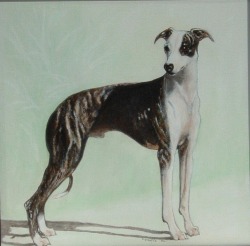 'Bentley' 2003 ASADS finalist
Late in life, Christine got back into painting and she had good success with her work. Three times she was a finalist at "Art Show at the Dog Show", as well as winning multiple awards at equine art shows. She was very generous with her work and often donated art to different fund-raisers and charity auctions.  She was her own biggest critic and she was never done with most of her paintings, always revising and re-painting sections until she finally put them away for good unfinished.  For this reason, there is not much of her work around, probably just a few dozen paintings.

My mother loved whippets, especially puppies, and she loved taking pictures of them.  She was always happy to drive hundreds of miles in her old Honda to take photos of puppies as they grew, and these week-by-week chronicles of development are now worth their weight in gold for me.  She also was happy to be comandeered into photographing BIF winners and BOB winners for the NCWFA Newsletter, rescue whippets who needed homes, and any of our friend's dogs who just needed a good shot for an ad.  Always modest, she wouldn't sign her glamour shots like I wanted her to, and she never charged for a photo. 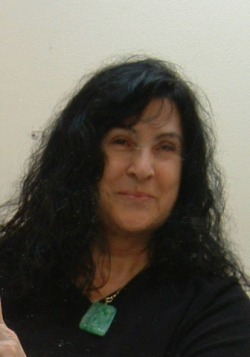 Since Christine was always behind the camera, it is very hard to find any photos of her.  After she died, I found some self portraits of her on her hard drive, one of which is to the left.  I suspect she would be unhappy I published it, but I think it's a good picture.

My Mom should have been able to live on a luxurious horse farm, paint the day away, and breed Arabians like she wanted to, but she was stuck with us in the City, having to work and provide for her children. She did the best with the hand she was dealt, however, and made her own little patch of San Francisco graceful, stylish and beautiful. 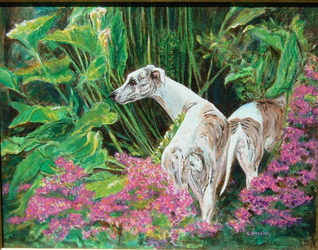 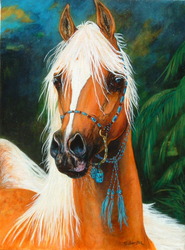 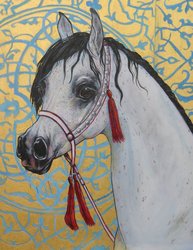 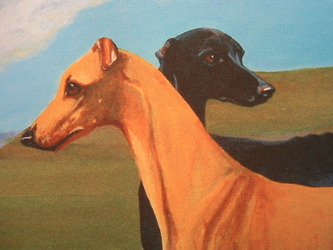 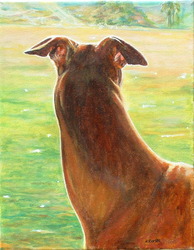 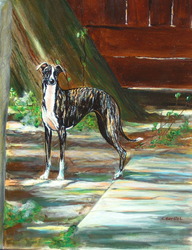