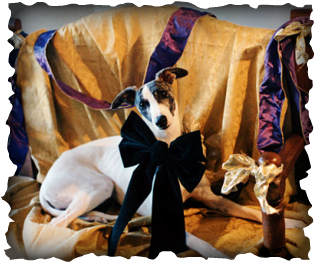 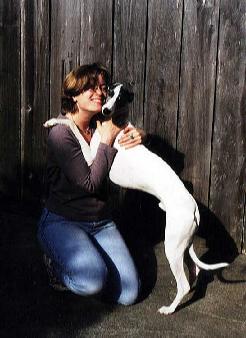 What can I say about Teddy?  Short and sweet - Ted was a rock star! Everyone who met Teddy, even people who, God forbid, didn't like whippets, loved him.  He was an incredibly personable dog, who had the uncanny knack of figuring out what type of behavior different people appreciated and then training us to respond to his cues. :)

Ted came to me at a very difficult time, as gift from Dan and Leslie and Wendy after I tragically lost Bentley.  Because of this, I coddled him.  Ted was much too clever to develop into the petulant, spoiled child that he could have been.  Instead he embarked on a career as the subtle, clockwork-smart, sometimes naughty, but always entertaining whippet we came to know and love. 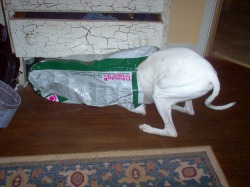 Never the super-star show dog I had hoped he would be (his high point was, I think a major RWD), Ted turned his sights on excelling in areas that have no awards given.  For example, Ted early on figured out how to get into any trash can, no matter how well secured, and he was quite talented at blaming other dogs for his transgressions.  No food was safe from Teddy, although this was mitigated by the fact that as smart as he was, he never could get the hang of opening packages.  Many an afternoon I came home from work to find Teddy hoarding multiple packages of pasta and crackers, all unopened. I lost track of the times I had to administer Hydrogen Peroxide to prevent permanent damage from his dietary indescretions.

Lest everyone think he was a complete punk (the Punk was one of his less colorful nicknames), Teddy used his brainpower for good too.  He was by far the smartest and most biddable obedience whippet I've ever had.  This 'standard poodle in a whippet suit' was trained through Open, and if I hadn't suffered from a terminal case of nerves with relation to showing in obedience, I am sure he would have easily earned his titles, as he loved the game and the attention.

Teddy got very sick with Immune Mediated Hemolytic Anemia when he was nine and he hovered close to death for several days.  Even though he was stuck repeatedly with needles and was hospitalized and on an IV, he truly loved the vet's office and all of the staff at VHVS.  They loved him too, and it was a testament to what a good patient he was, that until his dying day when he entered the office, everyone would stop what they were doing and say, "Teddy!" and rush over to greet the rock star. 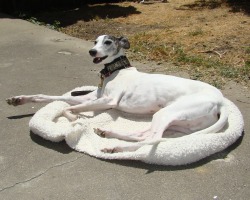 After his IMHA Ted became an even more accomplished food stealer. He did suffer from a bit of 'roid rage, from all the prednisone he had to take, and he was always watched carefully with the other dogs after this, since he could launch into an ill-advised attack if he thought someone was getting food and he wasn't.

Ted hated having his nails trimmed, and he would go to all sorts of lengths to avoid this chore. We nicknamed him "Mr. Claw", due to his usual set of talons, and he even had his own theme song, sung to the tune of 'The Simpsons' Mr. Plow.

Teddy developed a nerve sheath tumor on his spine when he was twelve and a half.  Even though he wanted to spend more time with us, he let us know when it was not fun anymore and it was time for him to go to the Elysian Fields. 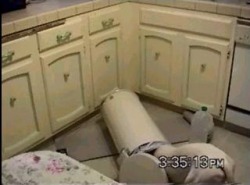 "Getting into Heaven's trash now"