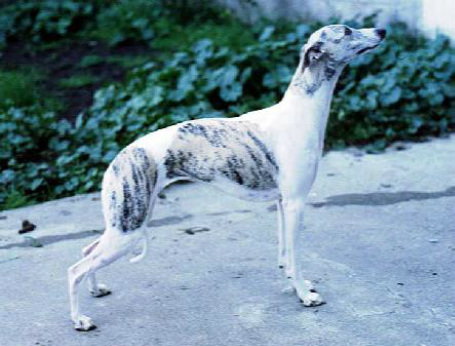 
​Amie was from the Reign X Julia collaboration. In a litter with five lovely bitches, she stood out from the beginning, mostly for her size (she was teeny) and for her color (she was the first non-black brindle we had ever bred). Amie grew up into a beautiful full-sized whippet of great quality. She spent the first six months of her life with Dan & Leslie and then went to live with my Mom. Amie finished easily in the show ring, handled by Jan Swayze in the East and Dan Silva in the West.

She was beginning a promising coursing career when she badly injured her pastern and was retired from running. In fact, Amie has always been a bit accident-prone. She has cut herself up numerous times free running (always on a weekend or holiday), has been bitten by strange dogs a few times (ditto), had a false positive brucella test (don't even get me started on that one, but suffice it to say I am on a first name basis with the staff of the diagnostic vet lab at Cornell), and she even had a bout with tetanus while in Colorado for the AWC National. 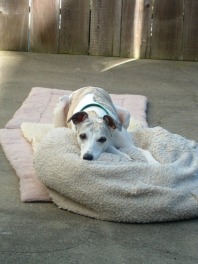 Amie was the dam of two litters. The first was a co-breeding with Elandan in 1998. The sire of this litter was a local dog owned by Betty Smith, Ch. Idover Perfect Gentleman. Arnold was tightly linebred on Linda Larson's Plumcreek dogs and was a son of one of my all-time favorite bitches, Ch. High Flyer Puddle Jumper. From that litter came Ch. Milescross Matinee Idol of E, SC & the almost finished Milescross Elandan Ingenue, SC.

For Amie's second litter I decided to go back into the Locar side of her heritage and she was bred to Ch. Locar's Clyde the Glide in 2000. Clyde was a "Chip" son, whose mother was a maternal half sister to Julia, so this breeding was very close on both sides of the pedigree. The only puppy shown from this litter ended up being the exotic Ch. Milescross Barbarella, SC, who is my ideal in make shape, as well as being one of the most tenacious runners ever! 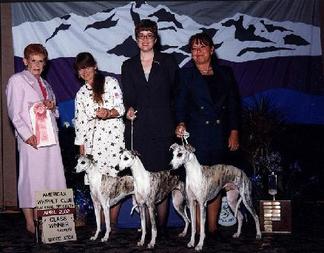 Amie gave me one of my fondest dog show memories ever when she was awarded Best Brood Bitch at the 2002 AWC National Specialty. Amie's handler on that day, Cindy Hatcher, Rhonda Gifford and I were laughing so hard at Amie's "post-tetanus perky ears" in the ring that we almost missed out on judge Isabel Stoffers pointing our way to first place.

Amie passed away at over seventeen years of age in the fall of 2012.  Here's a little something I wrote about her on Face Book after she passed away.

Amie was born on June 21, 1995, which made her an officially ancient whippet several years ago. She was well taken care of by my father, the non-dog guy, for the last four years, since my mom died. He walked her and her son Troy every day for several miles, and until recently the very old whippet did it with gusto. She came from a family of great longevity from both sides, but she outdid almost all of them, by making it to the ripe old age of 17 years and three months, with nary a day of sickness until today. My Dad took her to be euthanized by himself, which surprised me, but Dr. Knoble was there and at least he had a whippet person with him. Amie got to eat chocolate and macadamia nuts in the exam room, which she enjoyed, and I mean what was it going to do - kill her? :))

Amie was the most beautiful whippet I'd ever bred to that point. A surprising little curvy fawn and white brindle classic whippet in a litter of black brindle and whites and solid brindles. I always thought of her a a gift from the whippet gods to remind me of her ancestresses, Bianca and Quiche. She did everything on her own schedule, from finishing her championship when she wanted to, to deciding exactly who she wanted to be bred to, irregardless of whether she had been sent East at great personal expense to be bred to the big winner of the day (Amie liked Arnold better, I guess). She was a tenacious little runner, whose "raccoon feet" held her back from completing her titles. She was a good pet to my mom and dad and a great mother to her kids.

Not a famous dog, except in our house, but a great little whippet with a great big heart, who will be greatly missed.>>