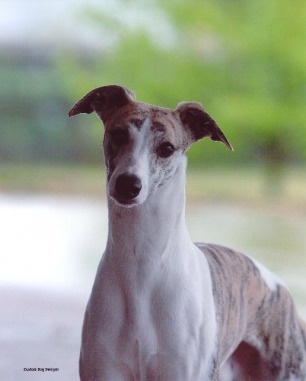 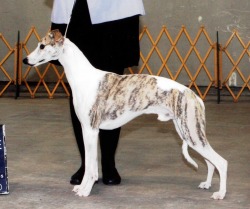 Bryce was a really handsome whippet!  He was Demi's grandson, out of her wonderful daughter Demitasse, and was sired by the magnificent Martin son, Griffin. I really loved this dog, and thought he was a very nice specimen of the breed.

I was honored to be able to show Bryce often during his career, and we enjoyed many great wins together.  He was a Specialty point winner and was a Select Award Winner at the AWC Western.  He was awarded third place in Stud dog class at the AWC National in 2008, in the company of many of our breed's finest and most famous stud dogs.  Not bad for a guy who sired one and only one litter! 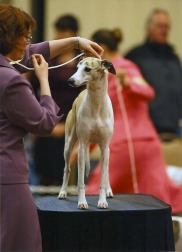 Bryce's classic good looks and compatible pedigree made him the obvious choice to sire Pie's second litter. He passed on his beautiful head and eye, as well as his nice sidegait to his children. 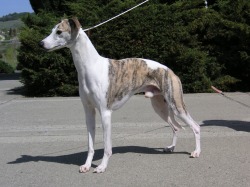 Bryce was a fun dog to be around.  He really took showing seriously and was always 'on', with super-duper perky ears always at the ready.  However, he really preferred running to trotting around a ring.  In his youth he quickly racked up eleven AKC coursing points, before he ruptured the tendons in his toe.  Before his injury, he was also a manic straight racer and was awarded two CWA ARX points.  He enjoyed coursing well into his veteran years.

Bryce had an exceptionally long life, living well into his seventeenth year. 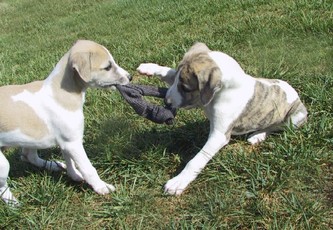 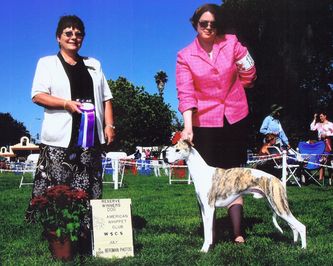 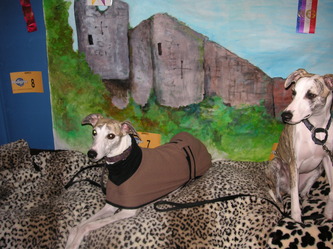