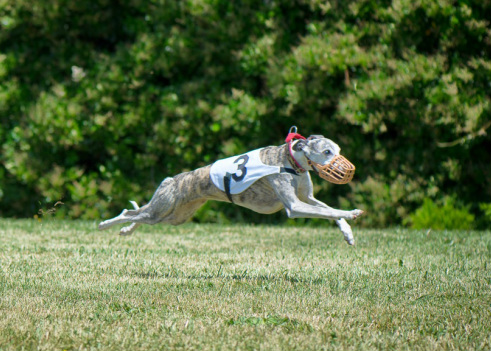 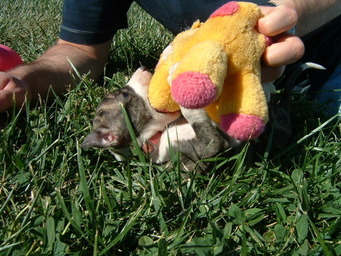 Imari was the smallest of the ten puppies out of Pie's first litter.  Her petite size often made her difficult to find among her crowd of siblings, and Wendy thought she has been abducted by a hawk out of the kennel when she was six weeks old (she was sleeping soundly in the back of the igloo, under a pile of blankets).  She grew up into a very tiny, refined whippet, who was cut out more for the life of a pampered mini-foot-warmer than a the super show dog I'd hoped for.

Schmoo got to go with me to the vet's office every day during her formative years, and she enjoyed showing people that whippets were friendly, outgoing dogs.  Her special skill was winning over 'cat people' and those who were afraid of dogs. She also learned not to be a breed snob, and she is to this day my only dog who really enjoys the company of  hairy, big dogs. 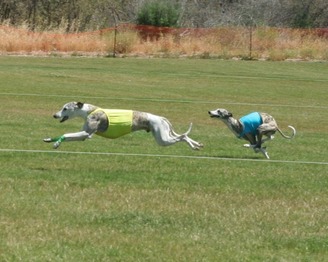 Imari coursing with her big buddy Peet
While she was a non-starter in the show ring, Imari had a long coursing career.  She was notable for pretty much always turning in a creative performance and coming in dead last, if she ran enough of the course to qualify at all.  My ultimate ambition was getting a MC on Imari, but this was a pipe dream, since she decided to wait at the start, watching the other whippets run the entire course, and then coming out like a house on fire when the lure was coming in to the finsih to catch it.  This was of course really dangerous, so Schmoo was retired needing five more runs for her MC.  Imari  buckled down at the races, always running keenly and cleanly, usually contesting for the Turtle award with her pal Scout.  One very hot day she really shocked us all by winning two races and finishing the event as High Score D dog! The next day it was back to the Turtle for her. :) She was a  most valuable trainer on the track, never, ever veering from her course even if run over, bumped or humped, all of which have happened to her while schooling youngsters.  Schmoo always had her eyes on the prize!


Imari is really happiest at home, ruling the roost.  Her bossiness with her larger and younger family members has begat the phrase "Schmoo's the Boss" around here.  She is as good a natured whippet as I could have wished for, always cheerful, with an adorable habit of 'burring' her greeting to those she really likes.

I wrote the following on the day Imari passed away:

Imari was my puppy back from the 2004 Stinger X Pie litter. Always the smallest among the ten puppies, who were part of the "Daisy Hill Puppy Farm" Pup-o-looza at Wendy Gay's that spring, Imari was my 'bring to the office' dog when I was a vet tech.  Consequently, she loved all types of dogs and all types of people.  She especially loved the vet I worked for, Dr, Klein, and the feeling was mutual. He didn't even get mad when she ate the leather-bound spines of ten years of JAVMA that lived on the bottom shelf of the bookcase in his office.

Imari never made a splash in the show ring, being teeny tiny and having a less than stellar rear. She thoroughly enjoyed lure coursing and racing & had a long career as the caboose at every local lure trial & the Turtle at the races. As time went on, Imari decided that coursing was dumb since the plastic bunny always came back to the beginning. She would run out about ten yards,then stop and watch the other two dogs, shaking her head, as if to say "those saps, why are they chasing it instead of waiting for it to come back around", and then run hell bent for leather out to meet the lure when it was coming in at the finish. This was very dangerous for her and the dogs who were actually coursing, so she was retired one event before her MC.

For some reason, Imari thought that it was OK to actually chase a lure that went in a straight line, so she had quite a nice little senior sidehustle as a trainer of green dogs for racing, a job that she excelled at, because she was always keen and clean, but so slow that no matter who they were, they could beat her and thus gain their confidence.

As her super-senior years wore on, teeny tiny Imari dwindled from a petite 24 pounder, to the 18 pounds she was today.  She was a hearty trencherman until the end, eating more food that one could think could be put away in her little gullet. She always greeted her family with a 'hearty haroo' [ a really cute burring noise] every day until recently, which always brightened our day. Imari apparently had some kind of neurological event today while I was at work, and I came home at lunch to a dog who could no longer stand or walk, and had no interest in food, I knew her time had come.

Bye Imari, see you over the rainbow!