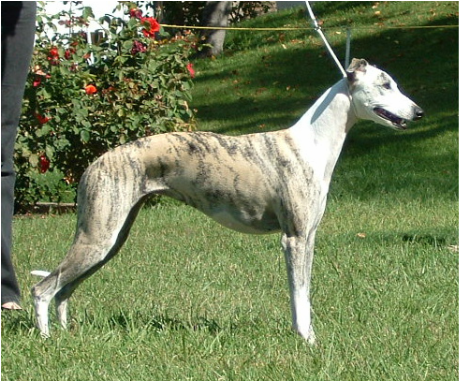 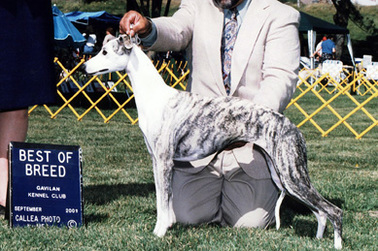 Pie was the result of a long-planned line-breeding on Ch. Locar's Show Off, along with the melding of those influential half siblings, Chip and Reign.  She was as lovely and exotic as we could have wished for, and is one of our most admired whippets.

A stand out from an early age, Pie finished her show title easily, with three majors. She was a consistent contender at big events, winning the BBE exhibitor bitch class at quite a few AWC and independent specialties along the way to her title.  Pie's exotic looks, reminiscent of a high-class Arabian mare, won her many fans, as well as made her an ideal  model for several of our artist friends, including the late Tami Baird, who made the wonderful header image for this website. 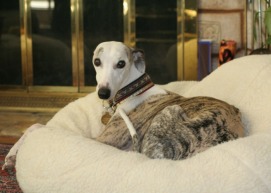 R. Vollmar Photo
Papaya was not content to be just a pretty face, however.  She was an explosive courser in her prime, who amassed nine AKC coursing points before she was retired.  She also thought oval racing was great, and she competed at a low B/high C level.  She always preferred running events to the show ring.

Pie was our little traveler.  Such beauty was meant to be shared! She started life with me, went off to live with the Silvas for two years, then spent several years with Wendy Gay enjoying farm living.  She resided for a couple of years with her 'husband' Bryce, and Todd and Donna Wilhoyte, before she came home for her last litter.  Pie enjoyed seven years of ultra plush, spoiled retirement living with the wonderful Helen Hultman. 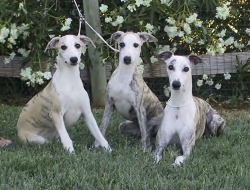 Pie's second litter, bred by me, was sired by the gorgeous Select Ch. Grand Prix's Seraphic, SC and contained several puppies who were successful in the ring, field, and on the agility circuits. All of her puppies have inherited her beautiful whippet head and eye, as well as her tenacity and focus in athletic pursuits.

In 2008, Pie made me very happy when she was awarded first in the Brood Bitch class at the AWC National Specialty, joining her mother Amie as a winner of this most prestigious breeder's class. She returned to the AWC National in 2010 and was fourth in the Brood Bitch Class.  At this same show, she capped off her show career in a big way by winning first in the hotly contested 10 Years and Older Bitch Class. In a class of good bitches who had maintained, Pie rose to the top like the 'classy lady' she is.


Papaya dealt with some serious health issues in her senior veteran years.  She struggled with multiple autoimmune disorders and bounced back from two diseases that are usually quick and efficient killers.  Pie made many friends for the breed during the times she spent hospitalized, due to her sweet and biddable disposition and the stoic way she faced her illness.