It has been a busy & eventful 8 months since we last checked in with News! Wilson has been a Dock Diving sensation, earning his Dock Master & Dock Elite titles! This means he has jumped 25 feet in distance five times or more into a regulation pool at NADD competitions. I am still amazed that a whippet I bred actually likes water enough to jump into a pool after a toy. Brother Odi earned his TKI title and thrilled us all by earning .333 of an ARX race point, by coming in 11th in a 52 dog meet. Our first ARX-pointed Milescross whippet since Jet! The Bird, who really is the word, continued her march to her show championship, only needing those elusive majors to finish. And Ava is almost race trained & no longer tried to exit stage left when in the show ring!

We had a fun National in Santa Fe! In addition to finding the best enchiladas suiza I've ever had & a giant Jackelope, the current had a good showing, as well. Ava was first in the Novice Bitch class & Odi was third in BBE Dogs. The brace of Odi & the Bird made their debut & while they did not place in their class, we are forever thankful to Mary Huff for getting photographic proof that they did indeed take at least one step in sync! 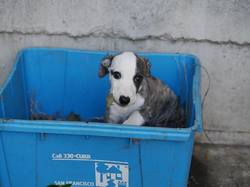 
We have puppies! Nine bouncing babies born on July 2nd! 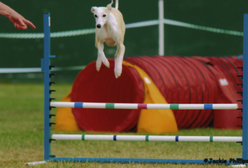 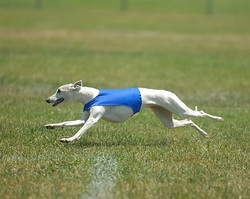 Bella J. (FC Milescross Aurene, SC) completes her AKC Field Championship, from the Veteran Class, at the NCWFA AKC Lure Trial, with the highest score of any whippet of the day!  Imagine what she could have done if she was lure coursed more than one day a year? :) 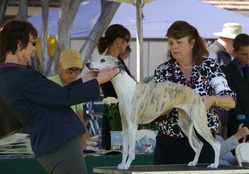