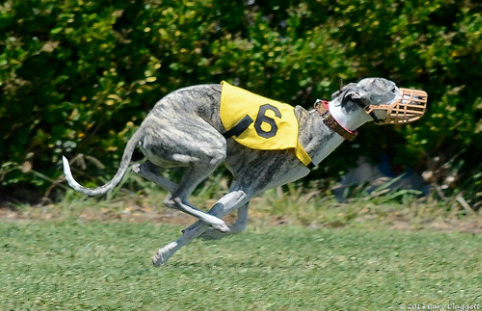 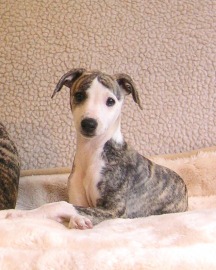 Jade was supposed to be my mother's whippet. However, when Jade was still a very energetic, naughty puppy, my mother was diagnosed with her final illness, so Jade came to live here.  Years later, Jade is still a very energetic, naughty puppy, and I suspect she will always remain so.  Reminscent of her double great-grandmother, Julia,  Jade doesn't really care if you think she is a bad dog, and she definitely has her own agenda at all times. She is lucky she is so darn cute, as her adorableness has kept her alive and forgiven for her many transgressions. 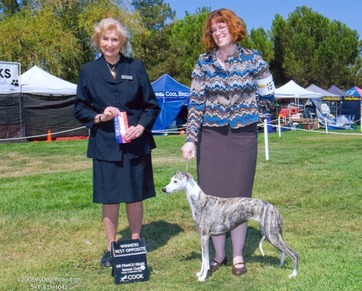 In her Jade is a gorgeous, stretchy, exotic little whippet, with the emphasis on the 'little'.  Due mainly to her petite size & worries about some familial health issues that never manifested themselves, she was spayed and retired from the show ring, and will forever rest on the laurels of her four points.  I probably should have bred her, but that was not in the cards.

On the field, Jade was awarded three AKC Lure Coursing points, two from veterans.  Apparently, no one knew that she runs her best in below 30 degree temperatures. Unfortunately, we are not willing to winter in WI for her, so these will probably be the only points she will ever earn, as it is not often cold in California during coursing season.  Jade is a cheerful and steady schooler of green hounds at coursing and has qualified many whippets.  At the races, Jade was a serious threat for winning the Turtle award once Imari was retired., but then decided that running was for saps, so she only comes out of we need an extra dog, as she will always come out of the boxes, but runs straight for the car or her friends at the trailer.